A “thank you” to the Christian parents from my kids’ schools

This post is an open letter to all of the Christian parents from my kids’ schools, who helped me become a better mother.

Dear Christian Parents Whose Kids Were Around Mine,

Teenagers, while shaped by their parents, make their own decisions and have their own opinions about life as they age.  But younger kids are almost parrot-like in their behavior.  They see their parents act, they hear the words they speak, and before you can “Mini Me” the parent can see themselves without a mirror.  This is apparently especially true for Christian parents, and I was able to reap the benefits from it.  Allow me to explain.

When one of your darlings put a drawing of my son (very neatly labeled, even!), lying on the ground, battered, and being stabbed through the eyes with a pitchfork by The Devil (also neatly labeled!) in his cubby, the accompanying message of, “If you don’t love Jesus, The Devil will stab you with his pitchfork and drag you to hell forever!” was almost unnecessary.  This gave me the chance to explain to my son that, despite being a work of literary fiction, the bible never portrayed Jesus as getting pissed off enough to hire a Mob contractor to haul his enemies off to hell.  The culprit claimed that he wanted to “save” the Ambassador, and that this was the best way he knew.  This added to my conversation with the Ambassador, in explaining that some people’s idea of “saving” other people was to commit unspeakable acts of abuse on them, all in the name of religion.  I did tell him that while he was free to research the Inquisition, the Crusades, and the Witch Trials, it was best to wait til he was older and could handle the nightmares better.

When my daughter was called “Devil’s Whorespawn” and a few other creatively created phrases, it offered me the opportunity to teach the Professor about patience with people who were not as intelligent as she was.  She learned that when someone cannot manage calm, reasonable discourse, that mud-slinging and pejorative phrases were their only resources.  She gained an understanding of just how threatened a person can be by someone who is “different,” despite the differences having no effect whatsoever on the instigator’s life. The Professor learned to have a sense of humor about people who fail to separate facts from lies, history from fables, who listen to outrageous rumors instead of merely speaking to the person involved.  These people can be dangerous, for sure, but at the end of the day, they’re really just kind of pathetic and amusing.

I will definitely admit to having a bit more of a challenge when the Ambassador was shoved against lockers, or knocked down on the playground, with threats to “kill the Devil inside” of him.  The Professor and the Artist can snark as well as any big sister can, but when their brother is threatened, hell hath no fury like my daughters.  So when they flew into a rage of vengeance at “those stupid Christians,” declaring their outright hatred for the same, I am ashamed to admit I was tempted.  I was tempted to allow myself, and through me, my children, to sink to the same despicable level as your children, and through them, you.  Because at that moment, in that second in time, I allowed myself the luxury of hate.  But that isn’t me, and that is not the way I chose to raise my kids.  Instead, I stopped them.  I told them that hatred was never acceptable, and neither was physical retribution.  I asked them if they thought it fair that blanket statements be made about non-Christians based on the actions of a few, and they said, “No.”  So I pointed out that that was exactly what they were doing, and it was wrong.  I further explained that there are Christians out there who walk the walk, and in later months, I tried desperately to seek some out so that my kids would have some decent personal examples to prove my words.  I found some, thankfully, and I’m grateful for their influence.  Through them, my children learned that just because the kids at their school, and the parents who were raising them, were a waste of blood and bone, doesn’t mean that all Christians were worthless.

Looking back, I am so glad that you helped me to become the mother I wanted to be.  Through your hatred, your violence, your bigotry, you helped me to raise children who think for themselves, who explore and consider other sides of situations, who celebrate the differences that make us unique.  You reminded me not to let myself slip into the temptation to retaliate, as that would make me no better than you were then, and most likely are now.

And now?  I have seen some of your children recently.  A few are dabbling in drugs, one had criminal charges for shoplifting, one (possibly two?) were pregnant.  My kids?  My amazing, Devil’s Whorespawn kids?  Mine all started college at 16, after graduating high school with honors.  They have paths that they have chosen to follow, and are making all the right choices to make it happen.  All three have chosen careers that serve and help others, albeit in very different ways.  They are strong, mature, confident, intelligent young adults who are a delight to their father and me every single day.  They make us proud just by being themselves. 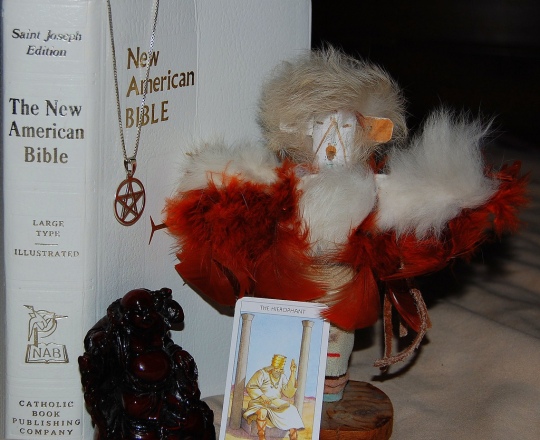